File this under the "Unintended hilarity" section.
Via Ryan Coetzee, I see that South Africa's beloved Minister of Sport and Recreation, Mr Fikile April Mbalula, MP, has written what can only be described as the most exquisitely verbose press release of the year.

It seems a crime not to reproduce the statement in full, but I'll just give you the first third as a taster. Before doing so, however, some additional context is that the national football side (Bafana Bafana) has just recorded it's first victory in African Cup of Nations. Not only that, but in doing so the team scored its first goals in about four games.

Statement By the Minister of Sport and Recreation South Africa, Mr Fikile April Mbalula, MP, On the Occasion of the Media Conference to Congratulate Bafana Bafana:

We stand here this morning as a proud and confident nation imbued by the resounding thrashing, walloping and gregarious defeat of the Angolan national football Team in Ethekwini by the our astonishing and call-heading warriors Bafana- Bafana, the crown jewel of the nation of the most popular sport in our country and the world over.

Like true warriors and combat ready soldiers, our national Team turned the misfortune of being denied goals in the warm up matches and first game versus Cape Verde [Population 500,585 - Ed.] into a promising and pending festival of goals during our last game against Angola. You the people of South Africa headed the clarion call:

To support our Team in the spirit and dictum of Nelson Rolihlahla Mandela (Seaparankwe) our national hero and international icon when he said that leaders and winners show the stripes of their true colours not in conditions of easiness but it is through difficult circumstances that a real leader emerges and survive. As we have come to know and acknowledge that social condition throw up concrete circumstance from which leaders emerge and chart a new a path into the future.

To this day we know that the nation was disappointed and dismayed that Bafana Bafana were not resolute and determined in our quest for excellence and for quality and thus succumbing to foreign tendencies of negative media reporting and being bullied on the social networks. Not that they were not patriotic, but, it was a sign of not accepting the fact that in sport there is lose, draw or win. But your characteristic of a leap of hope and faith in our national team and never die spirit gave rise to our deep understanding and personification of the adverb that - "birds of the same feather flock together" and which propelled our Team to the 2 - 0 victory in our last game against Angola.

After all you remain a constant reminder to the national Team never to abandon a sport code that is an oasis of hope, livelihood and symbol of nationhood to us and billions of people around the globe.

To this extent your wish and hope that Bafana Bafana must win came through two days ago and for the reason that prompted Chief Albert Luthuli to pronounce at his life time and age that the Tempo is quickening- Asijiki, Siyaya phambili.!!! The Cup will be hoisted aloft by President Jacob Zuma and will be delivered to our people as a symbol and meaningful contribution to the quest for peace and unity of purpose amongst Africans here at home and in the Diaspora.

I score that an 11 out of ten for enthusiasm. I am also very pleased that, like an good ANC cadre, our dear minister does pass up on the chance to make reference to Nelson Mandela. Genuinely loved and admired as he is, I'm sure even Madiba would be bemused by the never-ending appeals to his authority (and the tenuous circumstances that these usually involve).
As a final aside, I've little doubt that Mr Mabula's dictionary was in flames by the time he finished composing his statement. But... "gregarious defeat"? In the spirit of Inigo Montoya: 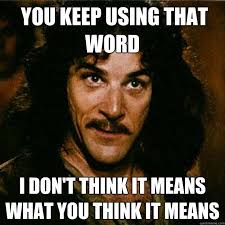