I was seven years old, and on the day before I was to begin, my father took me aside and told me that I must be dressed properly for school. Until that time, I, like all the other boys in Qunu, had worn only a blanket, which was wrapped round one shoulder and pinned at the waist. My father took a pair of his trousers and cut them at the knee. He told me to put them on, which I did, and they were roughly the correct length, although the waist was far too large. My father then took a piece of string and drew the trousers in at the waist. I must have been a comical sight, but I have never owned a suit I was prouder to wear than my father's cut-off trousers. 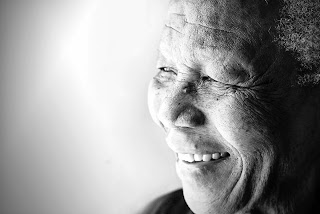 It has been a raw, emotional morning. Reading through the outpouring of tributes and obituaries has underscored what an extraordinary life this was. While Madiba's years as a revolutionary and statesman may have provided a legion of poignant quotes to choose from, the above passage, taken from his autobiography, is one that always gets me. It cuts to the heart of the humanity that made him such a beloved figure. The ability to affect those closest to us is, in many ways, more meaningful than the power conferred to even the most global of icons.
Twitter Facebook LinkedIn