My old school friend and unashamed proponent of all things gold, Chris Becks, has left a few comments underneath this post in which I criticized misleading statements on the relationship between money supply and gold prices. After a bit of back and forth, I hope that we can at least all agree on the fact that it is simply wrong to claim "there is a 93 percent correlation between M2 and gold". However, Chris does raise a valid point about looking at both supply and demand factors. So I'm going to take the chance to do that and hopefully clarify my views on gold in the process.

First things first, here is a graph of the overall demand and production of gold from 2001 to 2011, which coincides with the gold bull run of the last decade. I've taken this data from the World Gold Council and have also included the gold price on the right-hand axis. 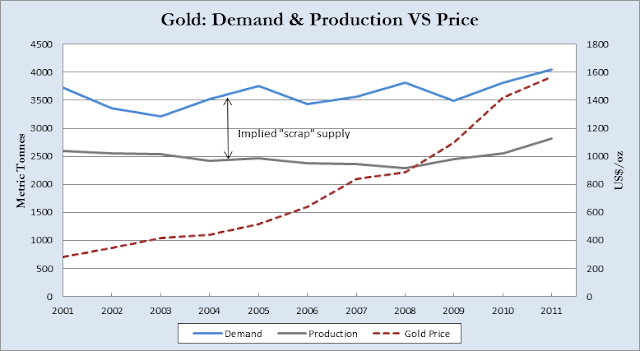 A few things immediately stand out. Demand and production are remarkably constant over the period despite the sustained price increase. Both  grow at an average rate of less than one percent per year over the full period. Demand exhibits a modest cyclical pattern, while production is almost flat. In fact, production even decreases slightly for a time — even though, again, prices are rising![*] During these periods, additional demand must be met by recycled or "scrap" gold that is traded in second-hand markets. Of course, what we see here are simultaneous price-quantity combinations that clear the market, so we should avoid making direct comparisons with the classic demand and supply curves that one finds in text books. That said, it is undeniably striking that quantity is virtually unchanged over the same 10-year period where prices increase by over 450%. In technical jargon, this points to some extremely inelastic preferences.

Let's disaggregate things a bit to get see if we can get a better handle on what's really happening. The second graph that I'm going to show is gold demand broken up by major category: technology, investment and jewellery. I'll keep the gold price on the right-hand axis and will also include a line that captures the cost of mining gold.[**] 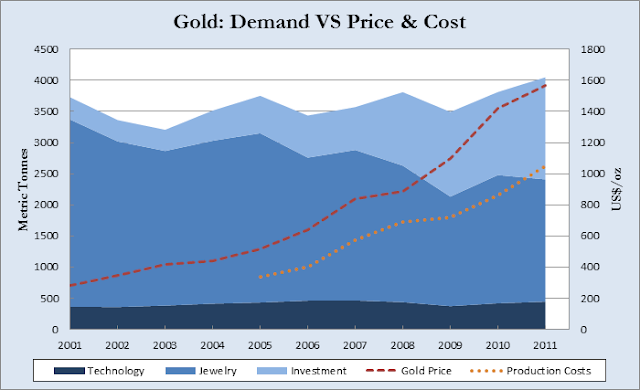 Things are starting to become much clearer. Looking at prices first, we can see that these have been undeniably impacted by the rising costs of producing an ounce of gold. This can be put down to a number of things, but chief on that list would be rising energy costs (since mines are incredibly energy consumptive) and the increased exploration and drilling costs that come with diminished supplies. Rising wage costs and depreciation costs are also factors.

We also see distinct trends emerging on the demand side. Gold use in the technological sector is extremely flat. The real change has occurred in the jewellery demand that has been displaced by investment demand. This is much more in line with what economic theory would predict; the demand for gold jewellery is (generally) decreasing in price. Economic theory would obviously also support the notion that demand for an investment good should increase as its value (i.e. price) increases. There is a complication, however, exactly because investment is fast becoming the primary force in maintaining overall demand for gold at record prices. Here are two ways of looking at it:


Of course, the two cases above are not mutually exclusive. Different people have been purchasing gold for different reasons. However, it is important to understand what you are betting on when you buy gold. For example, do you really still believe that we are at risk of hyperinflation after our experiences of the last four years? (I say this even as there is growing consensus that we should encourage higher inflation to bolster the economy.) Alternatively, your position may simply be that central banks will accumulate more gold reserves and thus put upward pressure on the price. The latter notion strikes me as infinitely more reasonable than the idea that we are going to return to some kind of gold standard. (I don't just mean the likelihood that it will happen, but also the idea that it will somehow solve our problems and not create a host of new ones.)

In sum, I don't deride gold, but neither do I think it has any mythical qualities. This includes the ability to properly regulate the present-day international monetary system. I advised those close to me to invest in the stuff immediately after the crisis and this has obviously turned out to be a profitable decision. I also believe that current economic conditions will support a relatively buoyant gold price for some time to come. However, I recognise that gold is subject to market vagaries and uncertainties that no-one can properly claim knowledge of. That is why I regard gold as an important component of any investor's current portfolio, but would never recommend increasing your overall exposure above, say, five percent (and perhaps even half that). Moreover, what worries me is that the people who are really bullish on gold are staking their claims on events that my economic logic can only regard as pretty remote probabilities. I may be wrong, but I'm very nervous to load up on any asset whose value appears to be increasingly driven by long-shot bets.

[*] I have discussed the negative short-run supply elasticity for gold in more depth previously. Scroll down to the bottom of this post if you are interested in that phenomenon.
[**] This is based on the authoritative "all-in" cost metric produced by precious metals advisory GMFS, which incorporates things like deprecation in addition to normal cash costs (per ounce). Unfortunately, I don't have information over the full period and had to piece together the figures from different sources. Still, I hope the general message is unaffected.
Twitter Facebook LinkedIn