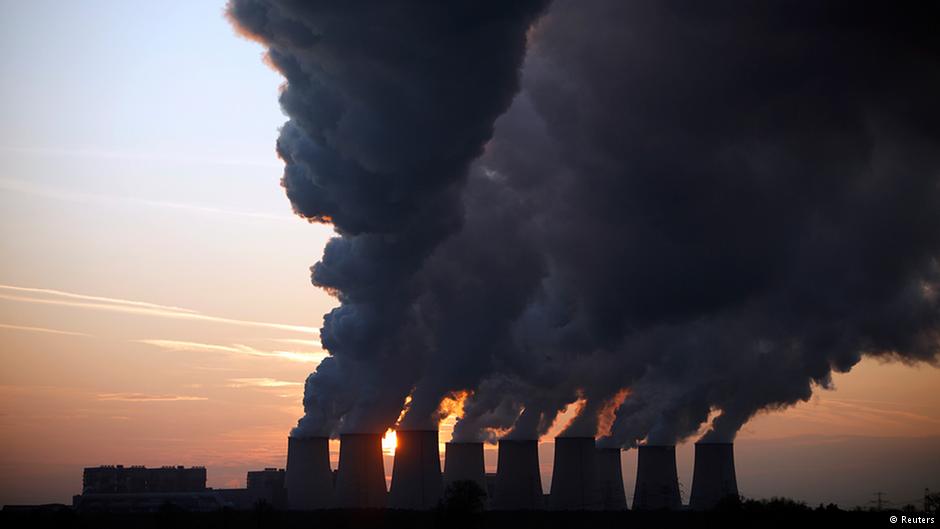 We’ve all seen pictures like the one above: The massive towers of a power station stand out ominously against the skyline, as thick plumes of CO2 pour into the atmosphere. One might even say that this kind of imagery has achieved an iconic status in framing the climate change debate. Except, of course, that those are just cooling towers. And that “smoke” billowing out at the top isn’t CO2, which is invisible after all. (You don’t see anything when you breathe out, do you?) No, what we’re actually seeing here is water vapour. 1

However, what if images like this are still illustrative of another problem related to energy production and the environment? Namely, the power industry’s critical reliance on water for cooling purposes.

Not everyone is aware of this, but power stations are incredibly thirsty beasts. That’s because they are basically giant kettles that convert heat energy into electricity by using steam to drive turbines. The steam must then be cooled and condensed back into a liquid state, so that it can be recycled and begin the process all over again. The best way to achieve this cooling process is via a basic heat exchange where the steam is left to pass over (cold) water taken from a nearby river or lake. That’s what we see happening in the “Condenser” at the bottom right-hand corner of the below figure. (Source.)

As I said, all of this requires a lot of water. A statistic that always drives the message home for me is that the thermal power industry — gas, coal and nuclear — accounts for a full forty percent of all freshwater withdrawals in the U.S. 2 Remarkably, that figure places it alongside the notoriously thirsty agricultural sector.

Periods of water scarcity consequently have important implications for the supply of electricity. Matters are further complicated by the strict regulation that exists on the discharge of used cooling water back into the environment. This used water will have absorbed most of the excess heat from the steam during the cooling process — which is the point after all — and will therefore be much hotter than the river or lake from whence it was taken. Unfortunately, this brings its own set of problems, as unusually warm water temperatures can be deadly to fish and aquatic plants. River fish and plants species are particularly sensitive to water temperatures above the mid-20 degree Celsius mark, which is why environmental authorities in most developed countries have placed restrictions on the so-called “thermal pollution” that comes from cooling water discharge.

Trying to pin down the effect that this all has on the cost of electricity is difficult for at at least two reasons. First, water is a badly undervalued and often unpriced natural resource. You don’t get much help by looking at what’s happening to water’s share in the production value chain, and so one has to concentrate on final (spot) prices. But this immediately leads you to a second problem, which is that final electricity prices are simultaneously determined by both demand and supply forces. For instance, the most acute periods of water scarcity invariably occur during heat waves. Electricity prices may be driven higher by reductions in supply, but they are also very likely driven up by increasing demand for air-conditioning. How do you separate out how much of the price increase is due to these changes in supply, as opposed to the increases in demand?

These are the issues that my coauthor, Øivind A. Nilsen, and I have investigated in a new paper that has just been accepted for publication in Land Economics. (Working paper version available here.) To the best of our knowledge, it is the first study that tries to establish an empirical effect of relative water scarcity — as measured by falling river levels — and river temperatures on electricity prices. The main challenge from an econometric perspective has been to disentangle the supply- and demand-side effects that I mention above, which we do through the use of instrumental variables. Our results indicate that electricity prices in Germany could be expected to rise by about one and a half percent if river levels fell by one percent, and by four percent for every percent that river temperatures rise above a regulatory threshold of 25°C. (We provide various arguments in the paper as to why Germany acts as a good “representative agent” for other countries in this case.)

There is a growing interest in this particular topic, as well as the important interactions between water and energy generally. Climate change, the issue that I started this post with, obviously brings added implications all of its own (e.g. here). While I believe our paper provides a good first insight into the electricity price effects of water scarcity, one limitation is that it probably doesn’t capture some of the more systematic dangers that are involved when entire regions are subject to drought and heat waves. Either way, expect to see water making the headlines in coming years for reasons related to power production.

PS – Coverage of our paper in the NHH Bulletin.