Secondary subject line: Why words and intuition aren’t always good enough.
A lot has been written about the use of mathematics in economics. Much of it negative and particularly so in the wake of the financial crisis (e.g. here, here, here and here). The root cause of these troubles apparently being that economists suffer from a major case of penis envy physics envy. Now, I’m no John Nash – or Paul Samuelson for that matter – but I feel the need to weigh in with my meagre two cents all the same.

First, let me say that I can wholly agree that a fixation with mathematical formulation has been detrimental to economics in a number of instances. By any reasonable account, many an economist has become enamoured of their elegant theoretical models and abstract equilibria points, all the while ignoring the implausibility of their founding assumptions and the unpredictability of real-life phenomena.  Point made, let’s correct for these imbalances and move on.
Unfortunately, not quite that simple. I’ve noticed an increasing tendency – especially among those in the blogosphere – to decry the use of virtually any maths in economics as at best worthless, and at worst downright harmful. Again, there are certain groups preaching that economics has no need for maths (or empirical validation for that matter), or that all useful economic knowledge can be derived through a set of self-evident axioms anchored in logic. “Real life is too complicated to be laid out in a set of abstract functions!” “The use of simplified models and assumptions merely distorts our understanding of the facts!” To me, this hypoallergenic position is to throw out the baby screaming with the bathwater and, moreover, it largely misses the point.
Some comments:

1) Yes, economists (and other social scientists) use much-simplified models to describe complex phenomena. That doesn’t mean that the relationships under analysis aren’t valid. Scientists (social and otherwise) already have a “perfect” model with which to observe the world... The world. Unfortunately, this is of little practical use. The planet is too complex to formulate in its entirety so we must simplify things in such a way that (hopefully) preserves the most salient features and variables.[*] The ability to simplify is a virtue that should be embraced, not disdained. To put it another way, try to think of simplified economic models – complete with stylised assumptions – as thought experiments. We deliberately isolate key variables and analyse how changes in their levels or compositions can affect other key variables, ceteris paribus.
2) It’s all good and well to talk about logic and intuition, but maths is a language of logic... perhaps the language of logic. Expressing relationships between economic variables – human or non-human, physical or intangible – in mathematical terms allows us to convey a message in manner that is unambiguous and can be universally understood.[**]  (Proficiency in mathematics not withstanding...) Further, and I would say more importantly, it enables us to fully work through the consequences and dynamics of these relationships. Our intuition may suggest certain outcomes, but intuition can be pretty limited in scope. Working through a set of equations enables you to arrive at a final result with a cool clarity, which may then show up unexpected results that only become “intuitive” upon further reflection. In other words, maths can both help to reveal ambiguous effects and prevent some of the undesirable ambiguities of normal language.
3) A vast array of economic data comes in numerical form, pretty much making mathematical evaluation the de facto method of analysis. Now, I certainly don’t think that anything and everything should be quantified in numerical terms.[***] However, if we’re dealing with money and prices, investments and interest, output and revenue, jobless numbers and government spending, wealth and exponential growth... There’s precious little way to do substantive analysis otherwise.
A final caveat: I find the totally rational, perfectly informed, ever-consistent, materially-selfish “homo economicus” as ridiculous as the next man. I also don't buy the idea that GDP is the ultimate measure of economic fulfilment or quality of life. While my primary economic focus is concerned with natural resources and the environment, I’ve been much influenced by the fields of behavioural, experimental and institutional economics. Modelling real human behaviour is notoriously difficult and prone to mistakes; something agreed upon by economists from Keynes to Hayek. That being said, I still think that mathematical formulation can help us to understand economic phenomena rooted even in the insights of the behavioural school; the obvious candidate being game theory, but there are other means as well.
THOUGHT FOR THE DAY: Maths can be difficult and/or boring... for a lot of us. Certainly, it can be harmful to focus on the elegance of a theoretical equation at the expense of observing what actually happens in the real-world. However, economists and other social scientists need maths. Our understanding of our respective disciplines is certainly richer for the rigour that maths helps provide. It is not the only tool at our disposal, but a critical one nonetheless. And relying solely on words or our intuition is often simply not good enough. 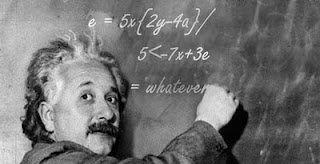 In some upcoming posts, I’ll try to follow up on this discussion by providing two examples – from very different areas of economics – which I believe serve to neatly illustrate my above points. Stay tuned.


UPDATE: The first of these examples, The "Oil Tank" Model is up.
UPDATE 2: The second example, Schelling's Segregation Model is up now as well.
[*] The corollary of this is that, when doing empirical analysis, we acknowledge our level of uncertainty and work within those bounds. Of course, this is something that ANY scientist worth his salt does. (Climate Change deniers take note.) I certainly believe that any theory needs to seek empirical validation and should posit a falsifiable hypothesis. I won’t even begin to touch on the role that empirical testing plays in telling us about the magnitude of economic effects, even when we have very strong theoretical grounds to be sure about the direction that those effects should take.
[**] As one textbook puts it (referring specifically to price theory): “[F]ew people are ingenious enough to grasp [its] more complex parts without resorting to the language of mathematics, while most ordinary individuals can do so fairly easily with the aid of mathematics.” This particular book also starts with a great quote by Emerson: “If I have a message to send, I prefer to use the telegraph to the wheelbarrow.”
[***] Unlike, say, Robert Lucas: “I internalized [the] view that if I couldn’t formulate a problem in economic theory mathematically, I didn’t know what I was doing. I came to the position that mathematical analysis is not one of many ways of doing economic theory: It is the only way. Economic theory is mathematical analysis. Everything else is just pictures and talk.”
Twitter Facebook LinkedIn