I'm a rugby man first and foremost, but have certainly grown into my football fandom over the last few years... especially after spending time in England and other parts of Europe. You cannot help but get up to speed on your weekend football results and banter if you properly want to integrate into a London, Oslo, or Lisbon. (On that note, I'm always struck by how much of leveller sport is around the office, which is one of the great things about it. I've seen canteen staff vigorously debating top management types on something as mundane as an offside play from the weekend more times than I care to remember...)
And, of course, the World Cup in South Africa was, to use the local vernacular, ama-ZING. I only went to one stadium game*, but was right in the heart of the action for most of the tournament. The fanwalk area around Cape Town Stadium was always epic, as was the general vibe in the whole country at the time. I'm really stoked that I got the chance to go back for that.
Anyway, what I'm getting to here is an article from The Independent on a Fernando Torres press conference, following his much-discussed (read: highly controversial) transfer from Liverpool to Chelsea. I should add that Liverpool happen to be, unfortunately, my club of choice and this has been a tough gig the last few seasons. Torres was, for the most part, the highpoint for any Liverpool supporter during this period: 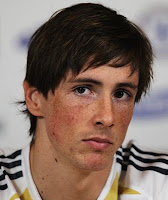 Fernando Torres dismissed accusations of disloyalty over his controversial move from Liverpool to Chelsea yesterday by declaring that "romance is dead" in football when it comes to players sticking with their clubs and said he did not have the time to wait for Liverpool to rebuild.

In a frank and revealing press briefing, Torres said that he simply ran out of patience with Liverpool and feared that he would miss out on collecting the domestic trophies that so many of his Spain World Cup-winning team-mates have. He denied the allegations of hypocrisy over his previous protestations of loyalty to Liverpool by claiming that the only club he really loved was his childhood side, Atletico Madrid.

With the likelihood that he will start, Torres said that he would not celebrate if he scored against his former side but that was the only concession to sentimentality he made. He disagreed with accusations that he was a traitor, saying that he had given Liverpool three and a half good seasons as well as generating the club a major profit.

Torres said: "I see some players doing that [kissing the badge] when they join a club, but the romance in football has gone. It's a different thing now. People [players] are coming and leaving. When you are joining a club you want to do the best for yourself and that club, and that's all. Some people like to kiss the badge. They can do it. I only want to score goals and do my job, and achieve all the targets the team has.

I have to agree with him. For all the talk about loyalty, professional sport is a completely different animal from days gone by. Liverpool ceded the moral high ground some time ago when they embraced the same foreign-owner, foreign-player, high stakes financial game as everyone else. I'm not saying they could have avoided it - indeed, that's largely my point and if those are the rules of the road, you best stick to them. This post isn't meant to be a glowing review of the way Roman Ambramovich runs Chelsea (far from it), but football has made its own bed and now it's time to sleep in it.**
The top players expect to be surrounded by peers and management of similar calibre. If Liverpool couldn't provide that to a guy like Torres (indeed, they dismissed some of their best players in the last two seasons), what rights do they think they have in playing the loyalty card?
THOUGHT FOR THE DAY: The surest way to get someone to act like clown is to start treating them like they're in circus. Those who don't buy into the show can - and probably will - leave.
* If you're interested, the game in question was France-Uruguay. The game itself was rubbish (a nil-nil draw), but it took place on the opening day directly after Bafana Bafana (the SA national side) played Mexico in the first game of the tournament in Johannesburg. I went with a few mates and, having already spent a good few hours in the pub, we were fairly steamrolled by the time of the Cape Town kick-off. Not only that, but for some reason we had decided to go as three gorillas and a banana... Okay, the reason being we wanted to boost our chances of media footage! It worked a charm though; here's a pic from the next day's paper that was taken of of us (alongside some girls supporting ze frogs) taken just prior to the game: 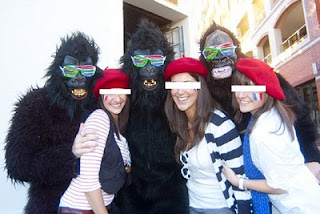 ** Sometimes I truly think that the salary caps in rugby (in places such as England) are a good thing. It seems inevitable to me that football will blow up in ever-expanding bubble of unsustainable salaries and dangerously debt-financed clubs. In a related note, here is the ever-provocative Bill Maher on what "makes NFL football so great" (spoiler: "socialism"): Irritable Bowl Syndrome. If you can't watch the clip, here is a text version.
Twitter Facebook LinkedIn