Chris has responded to my previous post, which he frames as a criticism of his research. I should state upfront that this does not strike me as entirely accurate, since I emphasized at various points that my concerns lay in the possible journalistic interpretation of his work. Some email correspondence between the two of us suggests that I am not alone in expressing such trepidations, but I digress. On then, to Chris’s response…
1) He begins by taking issue with my decision to focus on food prices, politely suggesting that I “may have missed” the fact that his non-discretionary index of living costs includes various other components (including rent, electricity, water, etc).
As it happens, I don’t think that I missed this at all. My reasons for focusing on food prices are quite simple. First, they provide relevant context to the real effects that I highlight in my post, i.e. agricultural shocks stemming from massive drought. This was done deliberately with the aim of illustrating the overriding message of my post: Attributing causation to any particular event is often very difficult, and we certainly have to bear real effects in the front of our minds when discussing the sources of inflation. (To reiterate, this is something that the Business Day article failed to do entirely.) Second, food prices provide an obvious segue to the other article that I discuss in my post, which concerns the role that monetary expansion had in driving up food prices and thus precipitating the Arab Spring. Such matters notwithstanding, however, I did happen to include the following passage in my original post:

To be clear, South Africans have also experienced sharp increases in the cost of amenities like electricity and water provision due to some boneheaded policy decisions and as a legacy of inefficient parastatal monopolies.

Chris may have missed that, though. (wink)
2) His second objection is that I am unfairly interpreting his research as a suggestion that food hikes are the only cause of violence. He quotes his references to “political grievances” as evidence that I haven’t read the article properly.
Again, however, this seems to be a misunderstanding of what I have written and the major point of my post. In the passage that he quotes, I'm not concerned with alternative causes of violence, but rather the underlying drivers of one particular cause, i.e. inflation. At the risk of repeating myself: To the extent that inflation does act as a trigger for social unrest and violence – and irrespective of whether that occurs alongside other factors such as political grievances or not – we need to understand what the underlying forces behind that inflation are. Any analysis that focuses only on the nominal effects of (quote unquote) “delinquent” monetary policy is simply misleading. Why? Well, because there may be very significant real price drivers occurring at the same time! This is something that the Business Day article completely failed to mention, and the same is true for The Telegraph article that I quoted in the second half of my post. I see nothing wrong with taking exception to such slipshod analysis.
3) Next issue: On my suggestion that one might baulk at the definitive description of this research as “proof” of the relationship between inflation and violence...  Well, I don’t have much to add here, since – again – this is a criticism of how the journalist chose to frame his article. “Proof” is simply too strong and simplistic a word to use given all this issues that I have raised. (Note: I see that this has happened elsewhere.)
4) The penultimate point that Chris makes in his reply extends beyond the article featured in Business Day.  I will summarize his argument as saying that the South African Reserve Bank (SARB) should abandon its focus on the headline CPI, because a) Non-discretionary inflation has been rising much faster, b) It cannot control which specific goods rise and fall in price, and c) It would better facilitate an environment of civil harmony by stabilizing the Rand against a basket of commodities.
Now, interestingly enough, subsequent to yesterday’s post I found this column that Chris has penned himself. (I’ll take it that we can safely assume away possibility of incorrect interpretation by a third party here.) He produces the below graph and proceeds to write:

Seeing as Non-Discretionary goods price inflation has averaged well above the SARB’s price inflation target of 6% for most of the past seven years, low income groups’ standards of living are falling at a compounded rate relative to high income earners. [Emphasis mine.] 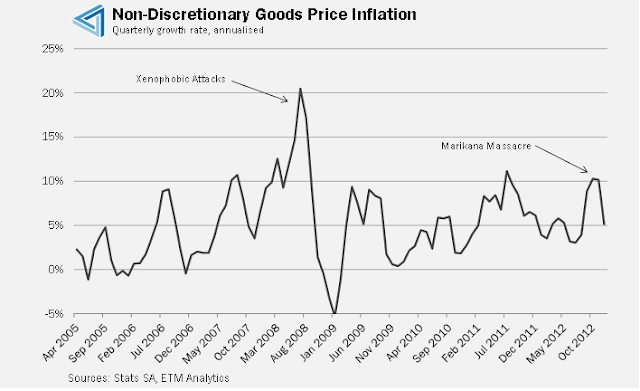 I don’t have the raw data to hand, but eye-balling the chart it doesn't seem at all obvious to me that non-discretionary goods have “averaged well above” the 6% inflation target. (Does it seem obvious to anyone else?) In fact, I’d hazard a guess that it averages a shade below the 6% mark. Certainly, the strongest statement that we can probably make about this series is that it fluctuates around that general level.
We all agree that no single measure of price changes is perfect. Indeed, it is precisely for this reason that we have constructed so many different indices in the hopes of getting a better sense of how “inflation” is playing out in the economy. Central banks like the SARB choose to follow a preferred metric – like the CPI – for a number of reasons, most of them very sensible. As it happens, the sheer volatility of commodities is a key reason why some CBs prefer “core” to “headline” inflation measures. Trying to conduct monetary policy in response to a simple basket of commodity prices would not only be incredibly difficult due to the inherent volatility (and the fact that the CB is more or less powerless to  stop these short-run swings), but potentially counterproductive because of the amplifying effect that it could have on consumption cycles. (For more discussion, see Matt Rognlie’s excellent posts on this subject: here, here, and here.)
5) As for his final point, that peer review is not superior to insights that bring in paying clients… Well, clearly that is not what I meant by “cracking” the problems of identifying a causal link between price increases and the uprisings in the Arab world. (Mind you, if he did accurately predict these events in advance of them happening then I certainly am impressed.) So, while I regard the profit mechanism as essential as the next economist, that has nothing to do with my concerns about getting to grips with some very obvious identification problems. That said, allow me to make a broader concluding remark: Just as no-one should suggest that peer-review is infallible, we should never confuse profitability with validity. Even psychics have been doing a roaring trade for centuries. It doesn't make them right.
Twitter Facebook LinkedIn