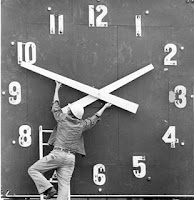 Over on the aguanomics blog, David Zetland has a post arguing that the concept of Daylight Savings Time (DST) is "rubbish". He says that it does not contribute towards energy savings and simply inconveniences people.
I'm pretty sceptical of the 'benefits' of DST myself, but felt compelled to comment on his assertion that "it wold be better (more flexible) for businesses to adjust work hours, instead of facing a command and control 'fix'". In essence, my point is that individual businesses are unlikely to adjust their own work hours, or have much freedom (i.e. scope) to do so in reality. Firms need to operate during "conventional" office hours because this is when everyone else is doing business. It just isn't profitable to break rank when it comes to this kind of thing. Deciding to open shop an hour later would be counterproductive in terms of profitability and competitiveness; you've essentially cut yourself off from the bulk of the marketplace for that entire period.
In these situations - where we're faced with norms that have become institutionalised - it's very difficult to establish the level of coordination that makes it profitable for a firm to change its work hours without some intervening force guaranteeing that everyone does the same. Or, at least some critical mass of firms that corresponds to a tipping point. Thus, if daylight savings does confer benefits (again, I'm certainly not convinced), the institutional inertia associated with the established system makes the market inflexible to adapt. In short, my behaviour is too dependent on the behaviour of others and the norms in society. This is closely linked to what Thomas Schelling described in discussing the problems of "micromotives and macrobehaviour"...
To give some brief anecdotal evidence, I mentioned the fact that, having worked in countries without DST, I can't really recall any companies changing hours of their own volition. (Flexible work hours — e.g. the option to arrive between 9am and 9:30am — don't count because firms arrange for overlapping cover. Someone has to be at the office at 9am and again until 5pm.)
Anyway, this got me on to the issue of cigarette bans and smoking laws, which I do consider a legitimate problem. I've been chewing on this for a little, since I sympathise with free market arguments over the primacy of private property and market incentives to create "smoke-free" clubs and restaurants if there is a need. Further, if non-smokers freely choose to frequent such places, exactly what externality does Government correct when it passes smoking legislation? However, while there's a seductive logic to these sort of arguments, things just don't seem to work like this in reality... Again, I can draw on my personal experiences. 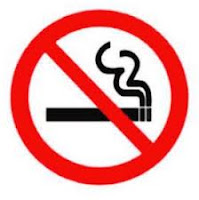 Having spent most of my childhood in South Africa, I remember restaurants installing separate smoking sections only once they had been required to do so by law. Despite this convention having been in place for over a decade now, bars and nightclubs — which do not fall under the same law — have yet to follow suit. So it's not like the market hasn't had time to react. In my home city of Cape Town (and the rest of the country for that matter), I really can't recall a single bar or nightclub that has established smoke-free zones of their own accord. I've asked several friends and family members just to be sure and they can't name any either. It's the same for other areas of the world that I've visited where no smoking bans exist.
Public health issues of cigarette smoke aside, I think that this again boils down a matter of institutional inertia and a coordination problem that is limited by competitive behaviour. Nightclubs and bars may want to switch over to smoke-free environments, but would be nervous to lose clientèle. Further, the problem with these places of social gathering is that they represent, in effect, areas that we like to enjoy in common. I don't wish to exclude my smoking friends from the places that I frequent, and vice versa. (I think that this issue of "commons" is another reason to be sceptical of the "freedom to choose" argument in this particular instance.) Unfortunately, since there are inevitably some people already smoking in the club, there's little point in "polite" — for want of a better word — smokers going outside for a drag. Lastly, I'd suggest that it's not a matter of smoking being "socially unacceptable", but rather that these institutions have become so entrenched that we can't assume businesses will change their own rules, at least not on any significant scale.
THOUGHT FOR THE DAY: We should always question whether Government interventions really make us better off as a society. The rule of thumb is that we want less micromanagement and more freedom to choose for ourselves. However, market outcomes don't always play out as well as we'd like to think they will. As always, the proof of the pudding is in the eating.