After a great start to the 2010 season, South African rugby descended into disappointment and embarrassment. Still, there's light at the end of the tunnel as Western Province have the chance to end a decade of mediocrity tomorrow and reclaim their rightful place as Currie Cup champions!
So, if there are any rugby fans out there reading this... Do the right thing and support the blue and white hoops tomorrow around 17:30 local time (GMT +2 hours). Come on! 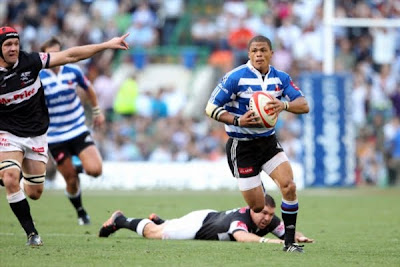 UPDATE 2: Back to my normal sober self and I see all and sundry are singing young Patrick Lambie's praises. Rightly so, after a stellar season and yesterday's m-o-t-m performance. Still, it wouldn't be the first time a 19/20-year old flyhalf has been fêted as the next big thing in South African rugby after dominating a Currie Cup final. Remember Derick Hougaard back in 2002/03? Brian "The Chiropractor" Lima does:

Thanks, Joost!
To be fair to Hougaard, he went on to have some very successful domestic campaigns with The Bulls. The problem is that he ultimately failed to deliver any performances worth mentioning for the national side...
Twitter Facebook LinkedIn