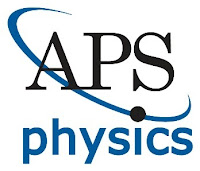 As reported last week, a physicist by the name of Hal Lewis resigned from the American Physical Society, citing his belief that the APS has been irrevocably corrupted by the politics and money of the global warming question. I left an update at the bottom of that post, linking to a response by Joe Romm of Climate Progress.
Since then, the APS has issued its own response.
My evaluation of this particular statement: meh.

While it's fine to say things like "The APS totally rejects Dr Lewis' assertion(s)"..., "rigorous academic standards"..., blah blah blah... I mean, come on, grow some balls. If you're fighting for hearts and minds, then you're going to have to better than that. I don't see much in the way that will persuade those who are suddenly unsure about climate change, or potentially leaning the other way. If Lewis' version of certain events at the APS is ridiculous then don't be scared of saying so and - better still - providing the neutral observer with evidence that directly refutes him.
Thankfully, some of the responses coming in from actual members of the APS is reassuringly less tepid. For instance Arthur Smith:

In any case, one outcome of the discussion last year was a plan to develop a new topical group on "the Physics of Climate", something I heartily endorse. Lewis seems to dispute the account given in the APS News article just linked, in particular referring to the organizing committee formed by the APS as "secret and stacked" to form "your own" topical group. If Lewis wasn't planning for the new topical group to be an APS topical group, what did he think he was doing? Lewis wasn't even the person who sent out the petition he talks about in his letter, it was Roger Cohen (not mentioned once in Lewis' letter - why?). Lewis's claims also seem a little odd given that the person selected by APS to head up the organizing committee, Nobel laureate Jerome Friedman of MIT, was one of the signatories on Cohen's petition for the new group. Did Lewis want to try to form a "climate skeptics only, nobody else invited" group somehow with APS sanction?

Lewis talks about "trillions of dollars". Going to scientists? That seems rather unlikely. The vast majority of the (billions) spent on climate research go to two places: satellite manufacture, launch and operations, and supercomputer centers for doing climate model calculations. The average climate scientist is paid no more than the average American, about $50,000/year, and many work for hardly more than minimum wage, some spending long hours and even putting their lives at risk for their work. This money is the source of corruption? Lewis has absolutely no basis for his claim.

Money is (or was until recently) certainly an attraction to young physicists: Wall Street money. If there is anything that has made the present generation of physicists perhaps slightly less brilliant than their predecessors, it's the siren song from global finance. Several of the brightest graduate students in my class went off to "quant" positions and made roughly ten times more money than the "average scientist" over the past couple of decades. Large quantities of money can certainly be corrupting - but the money doesn't come to the scientists doing science. Some scientists leave science to go where the money is, but they don't send any back.

But somehow, Lewis claims this "money flood" is corrupting universities and non-profit professional societies like APS. I wouldn't be surprised if there are some research areas affected by large sums of money flowing in - medical and pharmaceutical research, perhaps, or defense industry research. I myself have long found Eisenhower's speech on the military-industrial complex a compelling call to action. But Lewis thinks this has something to do with climate research, to the extent that it corrupts a professional society that doesn't even include very many actual climate researchers? That seems a real stretch... Where are his numbers? He has none, no proof of his speculations at all.

Reading this, should I have baulked at the monetary figures Lewis put forward? Well, probably. Certainly, the climate researchers I know aren't exactly living the "high life". It also wouldn't be the first time that sceptics have grossly overstated the money flows accruing to climate change researchers.
Having said  that, I do worry that important non-climate-related research is being sidelined by this overwhelming debate on AGW. Clearly, there are some very important scientific and environmental questions unrelated to climate change that deserve research funding as well. Moreover, its really frustrating to see people trying to lump everything under the climate umbrella or ascribe strong climate causation when there isn't any. (In this light, a close friend of mine has been doing interesting research related to the myopic political contextualisation of "climate refugees".) Of course, all this doesn't detract from the fact that climate change impacts seem likely to dwarf our other environmental concerns and, indeed, most likely exacerbate them.
Returning to Smith's post, I'm glad to see that he also picks up on Lewis's curious fixation with the word "incontrovertible" in the APS statement. This is something I discussed in my previous post. (i.e. That the earth has been warming for many years is hardly controversial... What remains is pinpointing the underlying drivers.)
Other responses to the Lewis resignation letter have similarly focused on the inaccuracy of his money claims, as well as his reliance on a rather flawed book by A.W. Montford. Eli Rabett is another APS member who has previous beef with Lewis and is weighing in on this matter.
THOUGHT FOR THE DAY: It’s better to provide solid evidence if you’re going to make strong claims. You can dress up the science and politics of climate change however you want, but some people already know where they stand.
Twitter Facebook LinkedIn